Which gpu for 3d rendering?

Graphics Card (GPU) based render engines such as Redhift3D, Octane or VRAY-RT have matured quite a bit over the last years and are starting to overtake CPU-based Render-Engines.

So what are the best Hardware-Components and best GPU for rendering with Octane, Redhsift3D or VRAY-RT, that also is affordable? Let’s take a look:

That said though, there is another factor to consider when choosing a CPU: PCIe-Lanes.

GPUs are attached to the CPU via PCIe-Lanes on the motherboard. Different CPUs support different amounts of PCIe-Lanes
and Top-tier GPUs usually need 16x PCIe 3.0 Lanes to run at full performance.

GPUs, though, can also run in lower speed modes such as 8x PCIe 3.0 Speeds and then also use up fewer PCIe-Lanes (8x). Usually,
there is a negligible difference in Rendering Speed when having GPUs run in 8x mode instead of 16x mode.

CPUs that have a high number of PCIe-Lanes usually fall into the HEDT Platform range and are usually also great for CPU Rendering as they tend to have more cores and therefore better multi-core performance.

When actively rendering and your scene fits nicely into the GPUs VRAM, the speed of GPU Render Engines is of course mainly dependent on GPU performance.
Some processes though that happen before and during rendering rely heavily on the performance of the CPU, Hard-Drive, and network.
For example extracting and preparing Mesh Data to be used by the GPU, loading textures from your Hard-Drive and preparing the scene data.

In very complex scenes, these processing stages will take lots of time and can bottleneck the overall rendering speed, if a low-end CPU, Disk, and RAM are employed.

If your scene is too large for your GPU memory, the GPU Render Engine will need to access your System RAM or even swap to disk,
which will considerably slow down the rendering.

Different kinds of RAM won’t speed up your GPU Rendering all that much. You do have to make sure, that you have enough RAM though,
or else your System will crawl to a halt.

I recommend keeping the following rules in mind to optimize performance as much as possible:

To be safe, your RAM size should be at least 2x your combined VRAM size.
You can benefit from higher Memory Clocks, but usually at a larger price premium
You can benefit from more Memory Channels on certain Systems
Look for lower Latency RAM. CL14, for example, could be slightly faster in some workloads than CL16.

To use Octane and Redshift you will need a GPU that has CUDA-Cores, meaning you will need an NVIDIA GPU.
VRAY-RT additionally supports OpenCL meaning you could use an AMD card here.
The best bang-for-the-buck NVIDIA cards are the NVIDIA 2070 RTX (2304 CUDA Cores, 8GB VRAM), 2080 RTX (2944 CUDA Cores, 8GB VRAM)
and the 2080 Ti (4352 CUDA Cores, 11GB VRAM).
On the high-end, the currently highest possible performance is offered by the NVIDIA Titan V and Titan RTX, that also comes with 24GB of Video RAM.
These Cards though have worse Performance per Dollar as they are targeted at a different audience and VRAM is very expensive
but not necessarily needed in such high capacities for GPU Rendering.

GPUs, that have 12GB of Video RAM and more, can handle high-poly scenes with over 200 million unique objects best.
Take a look at the performance per dollar tables below, though, to get an overview of how expensive some of these cards
can get without offering that much more performance.

PRO: Best temps when stacking cards, Quiet, can use only single slot height
CON: Needs lots of extra room in the case for tank and radiators, More Expensive

NVIDIA GPUs have a Boosting Technology, that automatically overclocks your GPU to a certain degree,
as long as it stays within predefined temperature and power limits. So making sure a GPU stays as cool as possible, will improve the performance.

You can see this effect especially in Laptops, where there is usually not much room for cooling, and the GPUs tend to get very hot and loud
and throttle very early. So if you are thinking of Rendering on a Laptop, keep this in mind.
Power Supply

Be sure to get a strong enough Power supply for your system. Most Cards have a Power Draw of around 180-250W.
CPU of around 100W and any additional Hardware in your case.

I Recommend a 500W for a Single-GPU-Build. Add 250W for every additional GPU.
Good PSU manufacturers to look out for are Corsair, beQuiet, Seasonic, and Coolermaster but you might prefer others.

There is a Wattage-Calculator here that lets you Calculate how strong your PSU will have to be.
Mainboard & PCIe-Lanes

Make sure the Mainboard has the desired amount of PCIe-Lanes and does not share Lanes with SATA or M.2 slots.
Also, be careful what PCI-E Configurations the Motherboard supports. Some have 3 or 4 PCI-E Slots but only support one x16 PCI-E Card.

This can get quite confusing. Check the Motherboard manufacturers Website to be sure the Card configuration you are aiming for is supported. Here is what you should be looking for in the Motherboard specifications:

In the above example, you would be able to use (with a 40 PCIe Lane CPU) 1 GPU in x16 mode. OR 2 GPUs in both x16 mode OR 3 GPUs one in x16 mode and two of those in x8 mode and so on. Beware that 28-PCIe Lane-CPUs in this example would support different GPU configurations than the 40 lane CPU.
Currently, the AMD Threadripper CPUs will give you 64 PCIe Lanes to hook your GPUs up to, if you want more you will have to go the multi-CPU route with Intel Xeons.
To confuse things a bit more, some Mainboards do offer four x16 GPUs (needs 64 PCIe-Lanes) on CPUs with only 44 PCIe Lanes. How is this even possible?
Enter PLX Chips. On some motherboards these chips serve as a type of switch, managing your PCIe-Lanes and leads the CPU to believe fewer Lanes are being used. This way, you can use e.g. 32 PCIe-Lanes with a 16 PCIe-Lane CPU or 64 PCIe-Lanes on a 44-Lane CPU. Beware though, only
a few Motherboards have these PLX Chips. The Asus WS X299 Sage is one of them, allowing up to 7 GPUs to be used at 8x speed with a 44-Lane CPU, or even 4 x16 GPUs on a 44 Lanes CPU.
This screenshot of the Asus WS X299 Sage Manual clearly states what type of GPU-Configurations are supported (Always check the manual before buying expensive stuff): 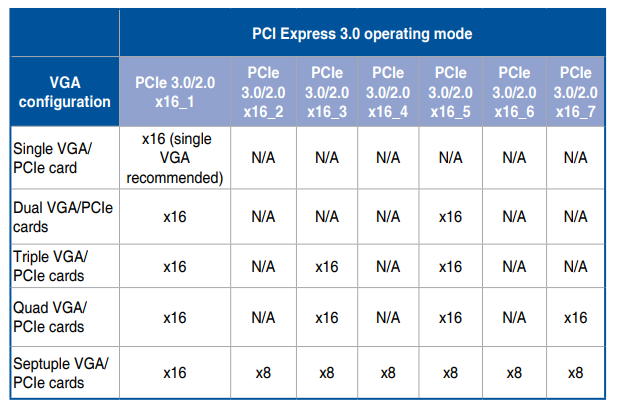 PCIe-Lane Conclusion: For Multi-GPU Setups, having a CPU with lots of PCIe-Lanes is important, unless you have a Mainboard that comes with PLX chips. Having GPUs run in x8 Mode instead of x16, will only marginally slow down the performance. (Note though, the PLX Chips won’t increase your GPU bandwidth to the CPU, just make it possible to have more cards run in higher modes)
Best GPU Performance / Dollar
Ok so here it is. The Lists everyone should be looking at when choosing the right GPU to buy. The best performing GPU per Dollar!
GPU Benchmark Comparison: Octane
This List is based on OctaneBench 4.00.
(It’s quite difficult to get an average Price for some of these cards since crypto-currency mining is so popular right now, so I used MSRP) 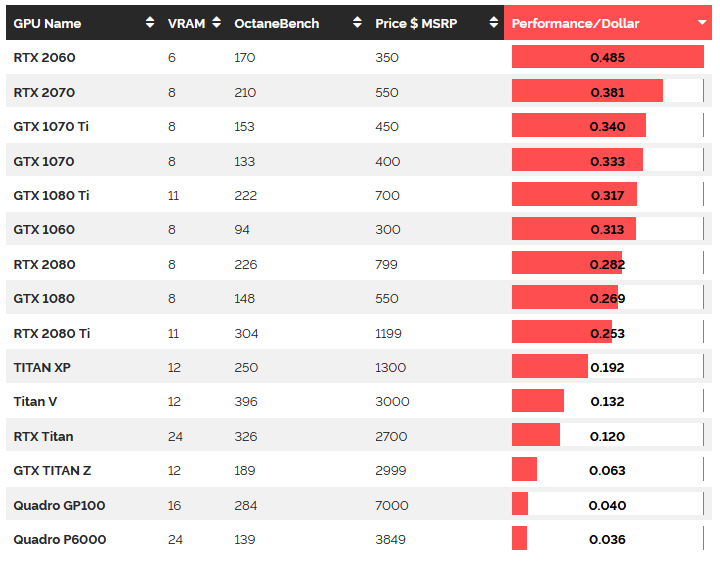 The Redshift Render Engine has its own Benchmark and here is a List based off of Redshift Bench. Note how the cards scale (1080TI) [RedshiftBench Mark (Time [min], shorter is better)]: 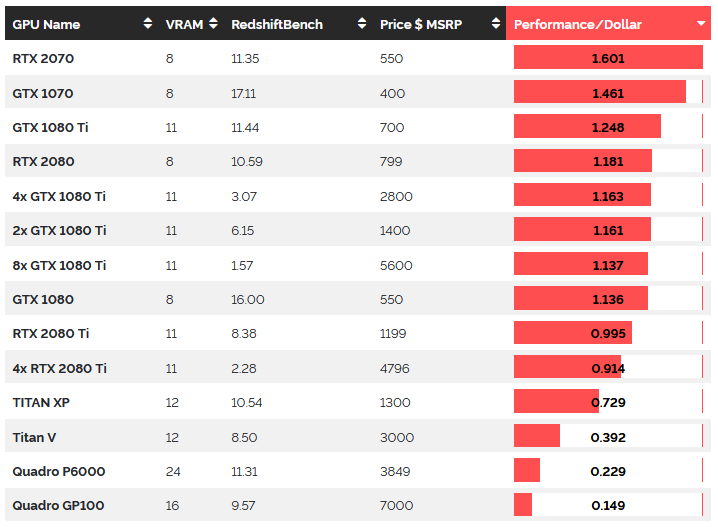 And here is a List based off of VRAY-RT Bench. Note how the GTX 1080 interestingly seems to perform worse than the GTX 1070 in this benchmark:

Speed up your Multi-GPU Rendertimes

So, unfortunately, GPUs don’t scale linearly. 2 GPUs render an Image about 1,8 times faster. Having 4 GPUs will only render about 3,5x faster. This is quite a bummer, isn’t it? Having multiple GPUs communicate with each other to render the same task, costs so much performance, that one GPU in a 4-GPU rig is mainly just managing decisions.

One solution could be the following: When final rendering image sequences, use as few GPUs as possible per task.

What we usually do in a multi-GPU rig is, have all GPUs work on the same task. A single task, in this case, would be an image in our image sequence.

4 GPUs together render one Image and then move on to the next Image in the Image sequence until the entire sequence has been rendered.

We can speed up preparation time per GPU (when the GPUs sit idly waiting for a task to start) and bypass some of the multi-GPU slow-downs when we have each GPU render on its own task.

Now 4 GPUs are simultaneously rendering 4 Images, but each GPU is rendering its own Image.

Some 3D-Software might have this feature built-in, if not, it is best to use some kind of Render Manager, such as Thinkbox Deadline (Free for up to 2 Nodes/Computers).

Beware though, that you might have to increase your System RAM a bit and have a strong CPU since every GPU-Task needs its amount of RAM and CPU performance.
Buying GPUs

NVIDIA and AMD GPUs are both hard to get by for a reasonable price nowadays since mining is so popular. Graphics Cards are mostly Out of Stock and even when they are available, they are nowhere near MSRP. There is a site called nowinstock that gives you an overview of the most popular places to buy GPUs in your country and notifies you as soon as cards are available.

I put together some Builds in different Price ranges here for you to get a head start in configuring your own dream-build.
Redshift vs. Octane

Another thing I am asked often is if one should go with the Redshift Render Engine or Octane.

As I myself have used both extensively, in my experience, thanks to the Shader Graph Editor and the vast Multi-Pass Manager of Redshift, I like to use the Redshift Render Engine more for doing work that needs complex Material Setups and heavy Compositing.

Octane is great if you want results fast, as it is slightly easier to learn for beginners. But this, of course, is a personal opinion and I would love to hear yours! 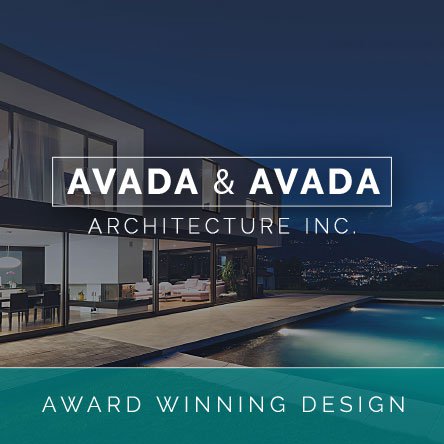